2022 was a strange year for everyone I think. To me, it was a year full of reconsideration, of reflection on myself, the World, and my family’s future. People tend to think that 2020 was the worst year to live recently, I don’t agree at all as I think the worst may come “soon”…

I published nine posts this year (10 if you include the one you are reading):

I think I found a “good” publishing rate, and I expect to write more technical blog posts in the next year (maybe a “game engine series”, who knows).

Professionally, 2022 got off to a terrible start but ended with the best work experience of my life.
I switched in 2021 from an AI Engineer job to a Senior Software Engineer job, and 2022 was another transition to a Game Developer career (to be honest, more a Game Engine Developer job), at Red Art Games.

After eight months at Red Art Games, I found out the video games industry works great to me compared to other ones. The thing I like the most is: your work has an end. Once the game is “ready to ship”, then you switch to another project and you don’t have to go back (except if a player found a bug or if you want to develop an extension to the original game).
Then, you take the experience you earned from the previous game, reconsider the full experience, take the best, and finally make a transition to the new game, and redo the same process again and again for the next game(s).

Compared to a web project, you don’t have to develop new features and reconsider the architecture of the current “stack” to deliver new things each X months. If you want to do more with an IP, then you develop a sequel or a new game in the same world, but it is another project.

Also, after a few years using Go and Rust full-time, getting back to C++ 17/20 comforted me in the idea that the language evolves in a good direction. 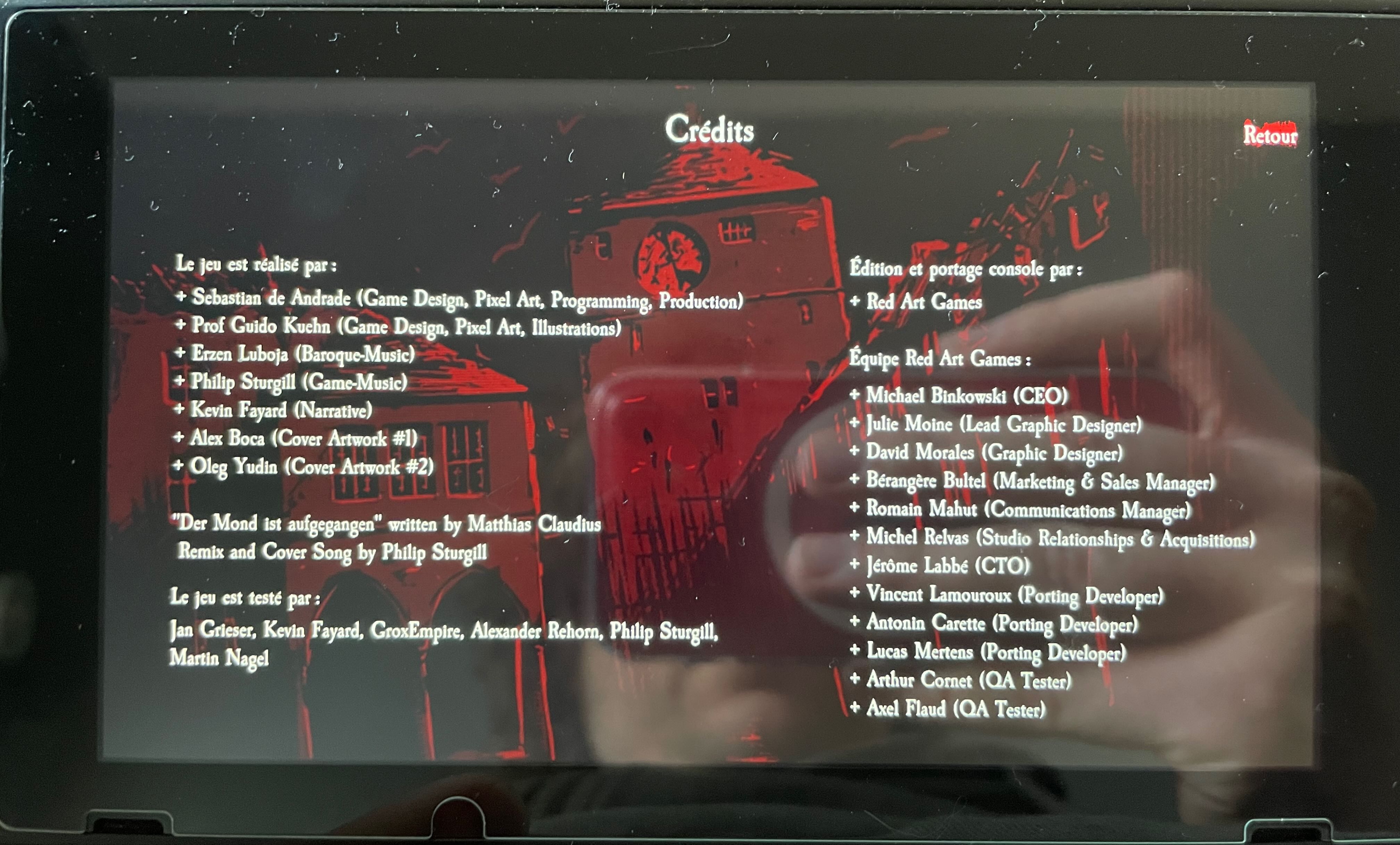 Heidelberg 1693 credits screen, on my own Nintendo Switch.

In 2022 I helped to port the games “OmegaBot” and “Shinorubi” on consoles, which are great projects for very different reasons.
For 2023, I expect more cool games to port, more complex tasks to learn new skills or to perfect my own skills, and a few “easy” tasks to take a deep breathe between two complex ones.

At the beginning of my gamedev career, I did not know what I wanted to do, and what I wanted to become. After eight months working in a video game studio, I understood I am more interested in game engine development and optimization (on the game engine side) than just “developing a game”.
So, I would explore more game engine development “stuff”, and maybe refine again my skills and where I want to contribute at the gamedev side.

In a more personal way, I sold my gaming laptop for a Steam Deck from Valve, which is actually the “2022’s Game Gear” compared to the Nintendo Switch. The Steam Deck is powerful, has some great features and works well, but more and more I play on it and more and more I understand why the Nintendo Switch is the best handheld device since five years now. Don’t get me wrong: it is awesome to play to “Death Stranding” or “Spiderman” on the Steam Deck, but I still consider it (and its OS) has a beta for geeks and hackers, and not a device for everyone. So, I expect a Nintendo Switch 2 for 2023, with more power and a slightly better battery.

Finally, in an idealistic future: less war, more love, and an eco-friendly society.

The beta version of “Cyberpunk 2077”, which is still in alpha version since almost three years…
If CD Projekt still think they can make an ‘ok’ game with what they done yet :)